Then, continue: To date, my life has followed the arc of the Little Women chapter — “On the Shelf” — that inspired this site fairly predictably.

In 2011, I met the man who would become my husband at the wedding of a childhood friend in the town where I grew up and in which my parents then lived. Instantly smitten, I moved back to the heartland, bringing my job at Hot Air with me. Shortly thereafter, however, I transitioned to the position of Policy Impact Director at the Oklahoma Council of Public Affairs.

In 2012, I married “the Oilman,” a drilling engineer at Devon Energy Corporation. In an apparent attempt to see how much change I could navigate in a short period of time, I also became the director of communications for the Archdiocese of Oklahoma City.

In 2014, “the first heir(ess) to the throne arrived” — we’ll call her “Sweet Potato” — and I did, indeed, “abdicate and go into a seclusion as close as a French nunnery, though by no means as quiet.” I wrapped my work at the Archdiocese in June of that year in anticipation of Sweet Potato’s arrival in August and devoted myself wholeheartedly to ruling and ordering my household. 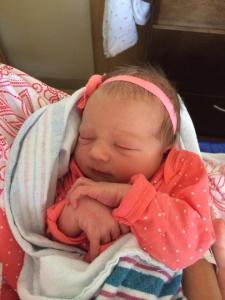 In truth, Sweet Potato ruled and Ryan ordered (in the sense of “kept order” not “bossed”), while I attempted — at the advice of Auntie Leila — to master no more than mere laundry and meal planning. If that sounds measly to you, I understand. It used to sound measly to me, too. Less like Meg and more like Jo, I’m naturally inclined to reading, writing and talking — especially about those once-taboo topics of religion and politics — and not particularly inclined to spend time in the kitchen, so intentionally devoting my time and energy to cleaning clothes and cooking meals was a keenly felt sacrifice that occupied the better part of a year.

About the time that I learned to keep laundry cycling at a respectable clip and to concoct a few dishes worthy of company (like chile-rubbed pork chops with sweet potatoes and grilled okra, a new summer favorite!), I began to entertain writing ambitions again. I envisioned a hybrid political commentary-lifestyle website with an emphasis on the “flyover” perspective. I intended it to be a very professional, very business-like venture, with investors and advertisers and a staff of two or three writers churning out a handful of posts daily. Then, in April of 2015, I found out the second-in-line-to-our-throne would arrive in December of that year. “Mint Julep” was born Dec. 30, 2015, and he, together with his sister, has simultaneously “enlarged my capacity” for life and curtailed the time I have available to write.

It would certainly have been possible to create and manage the site I imagined while maintaining the newly-established rhythms of my household and welcoming a fourth member to our family — other women have done it — but realism about my own limits got the better of me and I shelved my “statement of editorial prejudices” for that site. Instead, I began this one — “On This Shelf” — as a way to simply practice writing regularly again. Consider it my public celebration of the private, albeit often riotous, seclusion in which I live with the Oilman, Sweet Potato and Mint Julep. If it encourages you to celebrate your own vocation, as well, I’ll be so pleased.

One last thing: It bears mentioning that, in one important respect, I’m quite different than the March girls: I’m Catholic. (Not only are the March girls Protestant, but they’re conspicuously wary of the trappings of “popery,” as Amy demonstrates when she retires the rosary she receives as a gift from Aunt March’s French maid.) I’ve been Catholic from the cradle, but spent some years questioning every assumption I’d ever made and reexamining every belief I’d ever held dear (more of which later). Today, as a wife and mother, I don’t know how I’d even begin to live this vocation if my primary relationships weren’t with Jesus and His Mother, Mary. They’ll figure prominently here, as well. If you don’t already know them, I’m thrilled to introduce you!