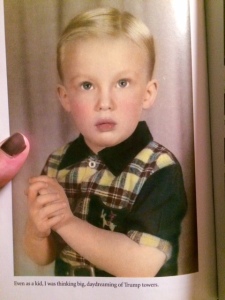 Count me among the many horrified spectators of the Donald Trump campaign for the presidency. (Also, color me embarrassed that, after the first two debates, I praised Chris Christie, the shameless opportunist! Then again, he did deliver during those debates and, at that time, he deemed Trump temperamentally unfit for president, an opinion with which I wholeheartedly agree.)

It’s not just that Trump is crass, narcissistic, egomaniacal, inexperienced, uninformed and unprincipled; it’s precisely that he taps into our most shameful impulses as humans, from anger to lust to greed to envy to baseless suspicion of “the other” to the unchecked will to power. For all that his slogan is “Make America Great Again,” he appeals to nothing that is good or great in Americans; he makes no reference to virtue.

Many commentators have attempted to decelerate the Trump phenomenon, with no apparent success. As his nomination has become increasingly likely, the chorus against him has acquired greater urgency, but, ultimately, the case against him is what it has been since National Review incited the indignation of Trumpkins with its “Against Trump” symposium.

Among the many gems in that symposium is this paragraph from Mona Charen:

Put aside for a moment Trump’s countless past departures from conservative principle on defense, racial quotas, abortion, taxes, single-payer health care, and immigration. (That’s right: In 2012, he derided Mitt Romney for being too aggressive on the question, and he’s made extensive use of illegal-immigrant labor in his serially bankrupt businesses.) The man has demonstrated an emotional immaturity bordering on personality disorder, and it ought to disqualify him from being a mayor, to say nothing of a commander-in-chief.

And these from Yuval Levin:

Trump’s diagnoses of our key problems — first and foremost, that America’s elites are weak and unwilling to put the interests of Americans first — have gained him a hearing from many on the right. But when he gestures toward prescriptions, Trump reveals that even his diagnoses are not as sound as they might seem.
Conservatives incline to take the weakness of our elite institutions as an argument for recovering constitutional principles — and so for limiting the power of those institutions, reversing their centralization of authority, and recovering a vision of American life in which the chief purpose of the federal government is protective and not managerial.
Trump, on the contrary, offers himself as the alternative to our weak and foolish leaders, the guarantee of American superiority, and the cure for all that ails our society; and when pressed about how he will succeed in these ways, his answer pretty much amounts to: “great management.”

And this one from Michael Medved:

Worst of all, Trump’s brawling, blustery, mean-spirited public persona serves to associate conservatives with all the negative stereotypes that liberals have for decades attached to their opponents on the right. According to conventional caricature, conservatives are selfish, greedy, materialistic, bullying, misogynistic, angry, and intolerant. They are, we’re told, privileged and pampered elitists who revel in the advantages of inherited wealth while displaying only cruel contempt for the less fortunate and the less powerful. The Left tried to smear Ronald Reagan in such terms but failed miserably because he displayed none of the stereotypical traits. In contrast, Trump is the living, breathing, bellowing personification of all the nasty characteristics Democrats routinely ascribe to Republicans.

Then, there’s this from Eliot A. Cohen in the most compelling anti-Trump piece I’ve yet read:

Politicians have, since ancient Greece, lied, pandered, and whored. They have taken bribes, connived, and perjured themselves. But in recent times—in the United States, at any rate—there has never been any politician quite as openly debased and debauched as Donald Trump. Truman and Nixon could be vulgar, but they kept the cuss words for private use. Presidents have chewed out journalists, but which of them would have suggested that an elegant and intelligent woman asking a reasonable question was dripping menstrual blood? LBJ, Kennedy, and Clinton could all treat women as commodities to be used for their pleasure, but none went on the radio with the likes of Howard Stern to discuss the women they had bedded and the finer points of their anatomies. All politicians like the sound of their own names, but Roosevelt named the greatest dam in the United States after his defeated predecessor, Herbert Hoover. Can one doubt what Trump would have christened it? …

He is a kind of male Kim Kardashian and about as politically serious.

On the other hand, if you’re looking for reasons to vote for him, here are 12 reasons from Allison Tuinstra (h/t Leila Miller):

1. Trump is humble, and he’s not too proud to admit it.

2. Trump is faithful. He has never cheated on himself.

3. Trump can’t be bought. Money and power clearly have no allure for him.

4. Trump is very talented at everything. Hugely talented and bigly educated.

5. Trump likes God. They have a lot in common. They are both huge and great. Also, neither of them have ever done anything that requires forgiveness.

6. Trump is open and honest. He doesn’t hide the fact that he has cheated on his wives.

7. Trump is a good businessman. For example, including strip clubs in his casinos illustrates how a business owner can upsell by offering complementary goods.

8. Trump is inclusive and compassionate. He gave jobs to many illegal aliens.

9. Trump has many helpful international connections. One of the high profile connections is Dennis Rodman, who was both a contestant on The Apprentice, and also close friends with North Korea’s Kim Jong-un.

10. Trump does not discriminate. He will give money to any party or candidate that might prove advantageous to his bottom line.

11. Trump is principled. His main principle is that everything is negotiable.

12. Trump is not part of the “establishment” or the “elite.” He is just like all of us regular people who inherited millions from our fathers.

To that last point: Many prominent conservatives have defended Trump as “anti-establishment” as though that qualifies him as a conservative (when, in fact, a case could be made that the very definition of “conservative” is to be “pro-establishment,” where “establishment” is defined as “order” or “a stable foundation”). Of course, I understand what they mean; many prominent Republicans have not behaved conservatively at all. I, too, have felt betrayed by “establishment” Republicans (e.g. Mitch McConnell and John Boehner), but that doesn’t mean I want a fellow with a penchant for single payer health care, misuse of eminent domain, questionable pro-life credentials, implausible immigration proposals and an uninformed approach to foreign policy to be president!

Consider this quote from Pope Emeritus Benedict XVI as it applies to Trump (with another h/t to Leila Miller!): “A man of conscience is one who never purchases comfort, well-being, success, public prestige, or approval by prevalent opinion if the price is the renunciation of truth.”

The arguments against him have been promulgated. That they have as yet gained little to no real traction among the populace is a sad testament to said populace’s allergy to seriousness.

P.S. I forgot until this very evening that I once posed a question to Trump on a conference call. He predictably and disingenuously dodged. Perhaps my sanguinity in the face of his moderation of a debate is still defensible (although I don’t care to try to defend it!) — but I definitely possess no such peace in the face of his participation in them!