Last night, I wrapped up a very protracted and belabored attempt to write a “think piece” about the canard that women don’t receive equal pay for equal work (one of just two freelance assignments I’ve accepted since Mint Julep was born!). It was the sort of piece that I would have churned out in an hour or two at most in the past — but, in my current circumstances, it absorbed nearly every naptime for at least a week.

It occurred to me that I am a fitting illustration of the very subject I aimed to address: Among many other explanations for the persistent pay gap, women are more likely to pause their career to care for children and adults — and such career interruptions often cause professional skills to atrophy. Atrophied skills, in turn, diminish a person’s career capital if and when he or she does return to the workforce.

All of which is to say: I’d voluntarily exit the workforce again and again and again to care for Sweet Potato and Mint Julep, but I do miss writing. Then, I remembered that I established this space as a way “to practice writing regularly again.” Surely, something is better than nothing — even if no one reads it.

Happily, I’m in a place to resume writing casually for at least two reasons:

“Focus is the new IQ,” says Cal Newport, author of Deep Work: Rules for Focused Success in a Distracted World, in this not-to-be-missed Federalist Hour.

Social media, among many other culprits, erodes our ability to focus because it entails incessant context-switching, which short-circuits the brain, Newport says.

The programmers who endlessly tweak Facebook, Twitter and Instagram do “deep work” themselves — they can sustain concentration for extensive periods of time — but, precisely because of their own powers of concentration, they’re very ingenious at devising ways to distract us, to turn our own attention away from our embodied realities and daily responsibilities toward an endless stream of irrelevancies. (This is not to say that all social media content is irrelevant; it is to say that, generally, it is irrelevant to the precise circumstances and problems we face before we log in — you know, the circumstances and problems from which we seek to escape by endlessly browsing Facebook!)

Newport states the terms pretty intensely: If you are serious about wanting to do anything of worth with your mind to benefit humanity, he says, you must look at social media as a marathoner looks at junk food — fodder for the occasional indulgence, perhaps, but poor substance for a steady diet.

I listened to the interview with Newport shortly after I finished reading the book The Dumbest Generation: How the Digital Age Stupefies Young Americans and Jeopardizes Our Future by Mark Bauerlein, a senior editor of First Things.

Bauerlein makes a pretty compelling case that excessive Internet usage does not yield the knowledge gains tech mavens and education experts say it should for the simple reason that young people don’t use the Internet to tap the vast reserves of human knowledge stored by it; instead, they use it primarily to maintain round-the-clock communication with one another.

“That is the genuine significance of the Web to a 17-year-old mind, not the universe of knowledge brought to their fingertips, but an instrument of nonstop peer contact,” Bauerlein writes.

Some of the very “benefits” of screen time are also its biggest drawbacks: It encourages non-linear, non-hierarchical thinking, which is fine when the user already knows how to think linearly and hierarchically, but a problem when the user really doesn’t understand the basics of grammar, logic and rhetoric, as, all too often, today’s users do not.

“More than half the students failed to sort the information to clarify related material,” the study found.

Bauerlein also cites extensive research from Nielsen Norman about how users engage Web sites (yes, I use the old AP style for that term!). The major (and obvious!) takeaway: People browse; they don’t read. Teenagers, in particular, don’t like to read a lot on the Web.

Bauerlein summarizes: “Forming reading and thought patterns through screens prepares individuals for only part of the communication demands of the twenty-first century, the information-retrieval and consumer-behavior parts. The abilities to concentrate upon a single recondite text, to manage ambiguities and ironies, to track an inductive proof … screen reading hampers them.”

Bauerlein’s book came to me on the heels of a convicting article in First Things that also suggested current trends in technology use pose trouble for our collective future.

“The very qualities that such engagement requires, whether our children are sick or well, are the same qualities being bred out of us by technologies that condition us to crave stimulation and distraction, and by a culture that, through a perverse alchemy, has changed what was supposed to be the freedom to work anywhere into an obligation to work everywhere,” Snow writes. “In this world of total work (the phrase is Josef Pieper’s), the work of helping another person become fully human may be work that is passing beyond our reach, as our priorities, and the technologies that enable and reinforce them, steadily unfit us for the work of raising our own young.

“Everywhere today we see parents — rich and poor, educated and uneducated — unable to find the time, marshal the resources, or summon the will to do this work. It is becoming almost a cliche in our culture: the preoccupied, distracted parent and the frustrated, disheartened child, unable to compete successfully with his parent’s computer or phone.”

Oh, how that paragraph brought me up short and indicted me of my deepest failures! How often I had turned to my phone at the first pinprick of boredom with the “indistinguishable” phrases of my toddler (in reality, she needs only for me to distinguish them!) and the “meaningless” babbling of my baby (in reality, his babbling means more than many words that I hear or speak!)!

According to Snow, researchers have demonstrated that all it takes is a single phone on a table, even if that phone is turned off, for the conversations in the room to fade in number, duration and emotional depth. So far, I have found this is just as true for conversations with a toddler as with adults. Kids are uncannily aware of phones. 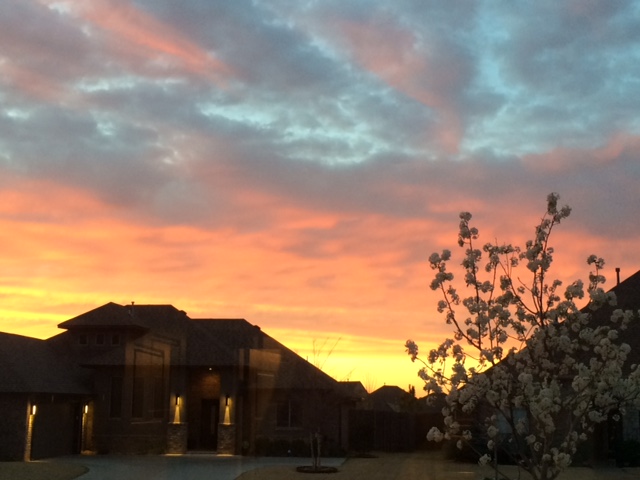 The sacrament of the present moment.

Increasingly, I’m perceiving it, this sacrament, the grace available to me in this moment. Yet, I’m also still failing far more than I care to admit to resist my phone. Snow calls the new phones “portable Pied Pipers, irresistibly pulling people away from the people in front of them and the tasks at hand.”

So, I’m trying to do with myself what I do with Sweet Potato. Rather than invest the bulk of my time, energy and attention trying to eradicate a bad habit, I’m investing the bulk of my time, energy and attention to cultivate its “positive opposite.” In this case, that positive opposite is “deep work” and most especially the “deep work” of being here now with my husband and children (well, not now; they’re all sleeping, but you know what I mean). A few ways I’ve done that lately:

None of this is easy — to sit silently in prayer, to really talk to my husband, to look my children in the eye — but I’m increasingly seeing just how necessary it is to sanity (with “sanity” defined as a recognition and appreciation of reality as it is given) and, furthermore, to happiness and peace.

Hmm. The more that I think about it, the more I’m OK with it if another three or four months go by before I write here again … ‘Til then, all peace and joy to you, reader!