At every turn, to paraphrase that adored literary kindred spirit, Anne Shirley, I found myself glad to live in a world with Septembers and Octobers and Novembers. I was glad of sunshine, glad of wind (which, given that I live in Oklahoma, is a triumph, as the wind can turn cruel in an instant!), glad of holy days, glad even of time in the kitchen!

It’s easy, though, to be glad of time in the kitchen in that savory season of Autumn, when cooler temperatures call for comfort food but the high holidays haven’t yet exerted their inexorable pressure to attempt exalted menus of elegance and impossibility.

A soup-to-nuts supper that begins with Retro Rum Punch and Chicken Liver Mousse Crostini with Pepper Jelly, continues with Veal Chops Milanese with Lemon and Herbs or Creamy Shrimp Piccata and concludes with a Praline Cream-Beignet Tower and Gingerbread Baked Alaska? Not currently in my repertoire — although I continue to dream every time I read my beloved Southern Living!

On the other hand, I can make fancy Shepherd’s Pie! See? 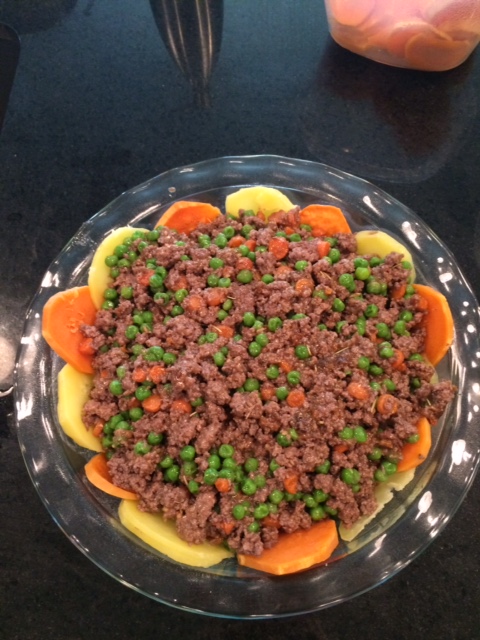 Chicken with Noodle is another classic, surprisingly easy dish: 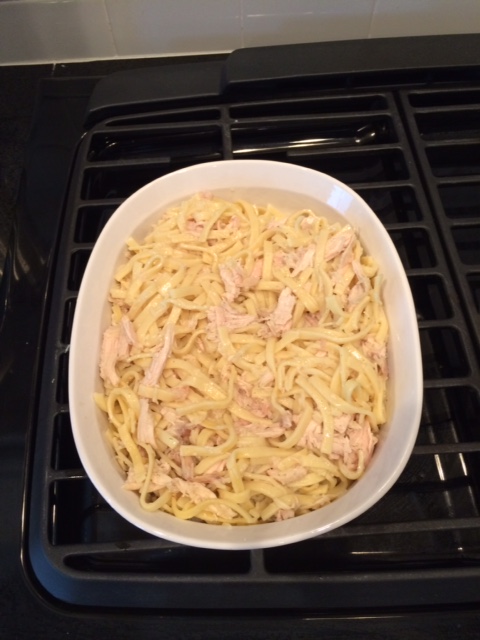 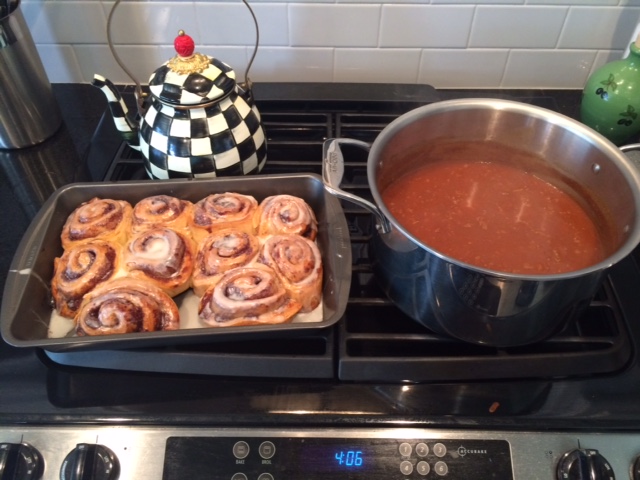 Yes, those are Pillsbury cinnamon rolls. I am not ashamed. My Grandma Frances’ chili recipe is marvelously mellow and ever so easy, so, while I’ve tried a number of more entailed recipes, I return to this one again and again:

1 lg. can of tomato soup

1 lg. tomato soup can of water

Simmer until all mixed and tasty. Pepper and salt to taste. Add onion if desired.

My grandma’s sugar cookie recipe, on the other hand, is not particularly easy to execute flawlessly, but the rewards are so worth the work! I’ve found I simply must pray the Memorare over and over again as I make them; it’s what Grandma Frances would have done! Sorry, the recipe is a secret, but here’s a picture of one of my better attempts at them: 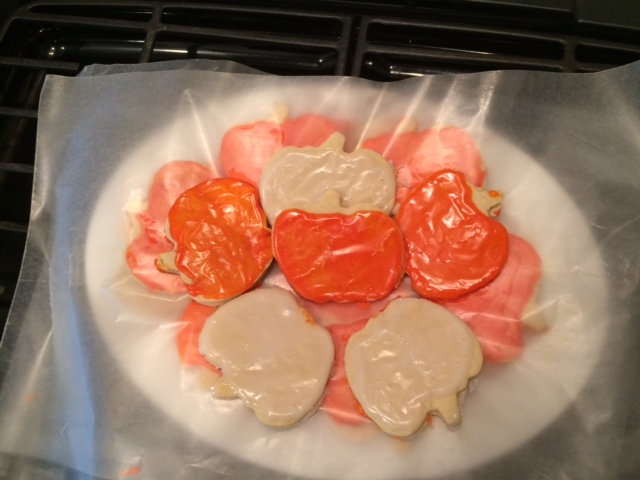 Because you can’t escape the ubiquitous pumpkin recipes in October and November, I also made these cream cheese pumpkin muffins at one point this fall: 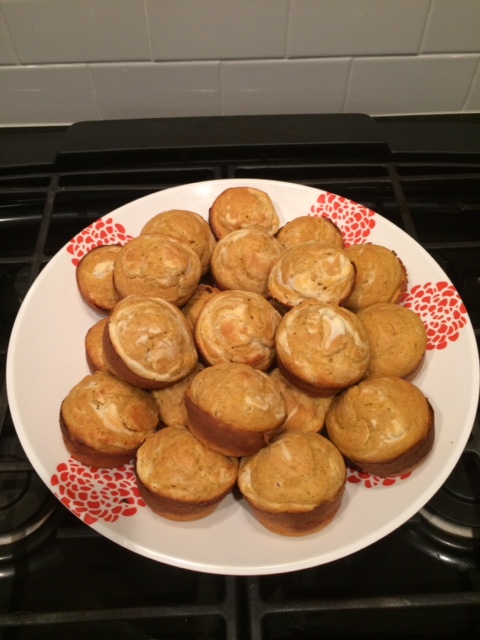 And, while I failed to snap a picture of the finished product, I also made caramel popcorn with nuts and peanut butter M&Ms. Who knew caramel coating is comprised of just a few ingredients? See, I love knowing this — that every single dish you eat in a restaurant and every single treat you buy in a store you could theoretically approximate at home (and, in fact, they all originated in someone’s home)! It’d probably be cheaper, healthier and tastier to boot!

Because “eats and treats” implies something more than just food, here’s a sample of the little pear flower arrangements I made for the Thanksgiving tables of my mother and mother-in-law. I made six total — three for Mom, three for Oilman’s Mom. Pop a few stems in a Bosc pear and voila! A bit of beauty for your table! H/t to what else? Southern Living! 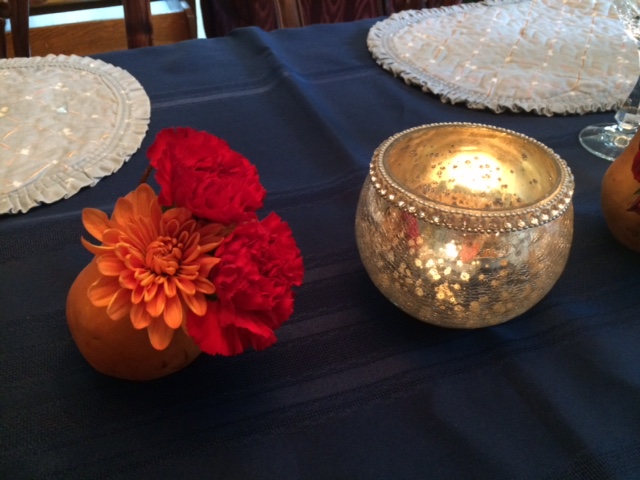 And because nothing is so utterly scrumptious and so thoroughly delectable as my baby, here’s Sweet Potato looking haughty on Thanksgiving Day: 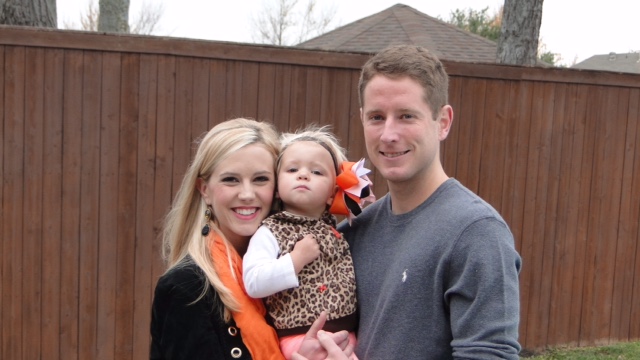 Oh, sure, by the bizarre marketing-and-consumerism-driven standards of most women’s magazines, this post is two months out of date, but I’d really rather not rush through the seasons, thank you very much. It’s still fall until Dec. 22, people! My next post will be a “Holiday Home Tour,” but not even it will imply that we’re in the Christmas season yet because we’re not — but more on that, then. For now: Happy Fall, Y’all!

P.S. Lest you think I’m even beginning to entertain ideas of myself as at all skilled in the kitchen, I’ll add that I burned plain ol’ steamed broccoli and carrots two nights ago, burned an egg sandwich today and thoroughly blackened instead of browned the sausage for tonight’s sausage-and-bean stew. A chef I am not, nor is this a food blog. Nevertheless, it is very much a part of the vocation of motherhood to put meals on the table so I’ll continue to try to whip up my own motivation every now and then with a post like this one!

5 thoughts on “Autumn Eats and Treats”