In my freshman year of college, I roomed with one of the least selfish people I’ve ever met. She was extraordinarily self-disciplined, incredibly generous and generally good-humored with a contagious laugh. As a committed Christian, she began and ended each day with the Word.

When we were juniors in college, she married a similarly sterling man. A few months after their wedding, I asked her what it was like to be married. I’ll never forget her answer.

“Marriage reveals my selfishness as nothing else ever has.”

At the time, I was genuinely shocked and even a little appalled. If marriage made this paragon of a person think she was self-centered, marriage must be miserable! I vaguely wondered whether I’d misjudged her husband. Perhaps he was selfish and had manipulated my selfless friend into thinking she was stingy because she was unable or unwilling to meet his every patriarchal demand? No other explanation made sense — for she was very obviously, very emphatically not selfish!

Now, four years into my own marriage, I understand what she meant — and, wonder of wonders, I understand that this fact of marriage is a feature, not a bug, for, while it is undeniably difficult and tiring to strive to overcome your selfishness, it is infinitely harder to be selfish and not even know it!

This year, in particular, has revealed to me just how much I’ve always assumed I was entitled to be comfortable.

As far as my relationship with the Oilman goes, marriage has still so far been surprisingly easy and fun. In the first place, we’re temperamentally very well-suited for one another (both cholerics, he with a side of sanguinity and I with a side of melancholy). In the second, our preexisting personal habits have proved mostly compatible (with the notable exception of our instinctive sleep schedules!). Those two facts often carry us through life changes that might otherwise cause strife or stress.

In fact, I often say that one of our greatest strengths is also our greatest weakness: We rarely fight because we instinctively agree on most matters. It makes it very easy to assume that we really do think alike on everything (when, of course, no two people really do, for, even within the truths of things, there are differences in understanding and personal tastes!). So, sometimes, we fail to actually communicate our thoughts to one another and miss opportunities to grow closer through the disclosure.

So, yes, the relationship between husband and wife can be relatively fun and easy — and marriage will still reveal selfishness like nothing else. That’s because, in the normal course of things, marriage leads to increased responsibilities of one sort or another and, very often, to children — and children, by their very nature, are very small, very demanding, very needy, very vulnerable, very innocent and very precious — and their parents, by their very nature, are responsible to and for them.

Those little children in whom the blood of the Oilman and my own blood runs thick obligate me by their very helplessness to put their needs before my own desires — and, often, before my own needs, as well. I sensed these truths about children after I had Sweet Potato, but they didn’t really sink in until this year after I gave birth to Mint Julep and promptly found myself bidding farewell to a myriad of tiny indulgences for which I quite literally no longer had time — as well as struggling to find time to really look the Oilman in the eye, let alone talk meaningfully with him.

Suddenly, I began to realize my selfishness as I never had before — for, when I had an hour or two here or there when the children were both napping or an evening when they were both in bed, I wanted to use it for myself, to read, to write, to think, to sit in stupefied silence or to scroll mindlessly down my Facebook feed — even if it had been days since I had really reconnected with the Oilman.

Oh, I knew it would be an objectively better use of my time to maintain the healthy habits we had consciously cultivated in our first three years of marriage, but whether I talked to the Oilman in the evening wasn’t a matter of anyone’s physical survival as was, say, feeding the children! If I was going to shirk any obligations and grab some time for myself, in other words, it was going to have to be my obligations toward my husband, who, I knew, was a capable adult who could fend for himself.

Funny thing, though: Every time I did that, I felt awful. Every plucked pleasure was immediately tainted by guilt. It would have been different if I had been using that time away from the Oilman and the babies to pray or even to really refresh myself, but I wasn’t. I was using it on “everything and nothing.” The Oilman was gracious; he could see, I think, that all I was doing was wasting time, but he said nothing because he genuinely wanted me to have time to myself (and still does!). It didn’t really feel like time to myself, though; it felt like time away from myself. It felt like escapism.

We live in an age when the Lie of the Imperial, Autonomous, Atomized Self holds sway. We talk and act as though people spring up individually from the earth, like Minerva from the head of Jupiter. According to this way of thinking, authenticity is the greatest virtue and repression the most shameful vice.We accept Shakespeare’s axiom — “To thine own self be true” — as gospel and direct most of our introspective energy toward discovering our “true selves,” as though our “selves” preexisted our relationships instead of arising from and within them.

It’s so appealing, this lie. It can be used to justify so much. The principle of the common good — which states that those least able to meet their own needs are entitled to have their needs met first — becomes subordinated to the principle of my pleasure. We don’t want to admit that, though, so we invoke the “oxygen mask” principle, reassuring ourselves that we cannot meet the needs of others until we have met our own.

Desires matter and they’re not to be indiscriminately ignored — often, especially if they’re insistent, they can be clues as to our callings — but they’re not indistinguishable from our needs. We know what we really need: We need Him, we need each other, we need food, water and shelter. It’s pretty simple, really. If we have those things, more or less, all the rest is gravy — and the proper response to all of it is gratitude, for it’s all a gift.

Pleasures, too, are not necessarily to be indiscriminately avoided (surely, the Lord designed certain behaviors to be pleasurable for a reason!), but they’re far more incidental to happiness than we often think, so the pursuit of pleasure can all too often leave us more miserable than before.

At the end of the day, happiness arises from virtue, from the life of grace, which is lived in and through our relationships (first and foremost, our relationship with Christ!), and, while grace itself is supernatural, the life of grace can appear pretty prosaic. It’s mostly about peacefully and prayerfully accepting reality and responding to it in the moment with love, gratitude and a sense of responsibility. To use an old-fashioned phrase, it’s about “doing our duty” to the best of our ability. 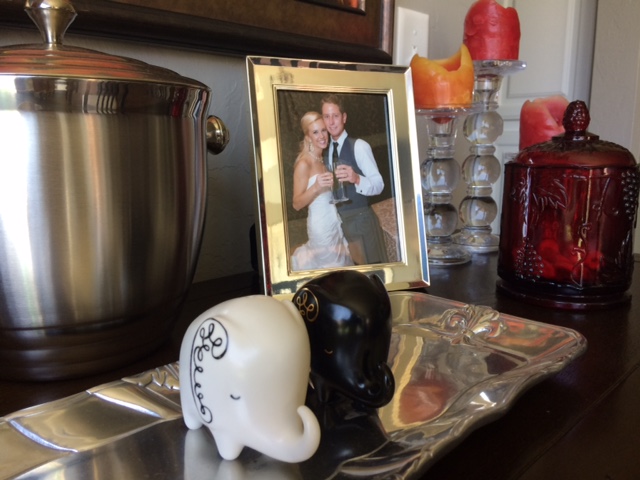 What I’ve learned in this past year of marriage, then, is this: In the face of my obligations to my husband and my children, I have two choices: (1) I can meet them or (2) I can shirk them. I cannot now, however, ever be free of them, for, whether I meet them or shirk them, whether I meet them lovingly or merely dutifully, I will always be the Oilman’s wife and I will always be the mother of Sweet Potato and Mint Julep. My identity has become inextricable with theirs; I am defined in relationship to them, just as I have always been defined in relationship to my original family — my parents and my brother and my extended family.

It makes it far easier to be the wife and mother I want to be when I shake off the Lie of the Atomized Self, when I call my selfishness what it is and when I ask for the grace to overcome it. So, in a spirit of joy, I say it again: Marriage reveals my selfishness like nothing else ever has — and praise be to God for that!

All of these thoughts went through my head two weeks ago, when the Oilman and I celebrated our fourth anniversary with yet another swanky dinner at yet another tony restaurant. In a dimly lit room that resounded pleasantly with the clink of silverware and low murmurs, I sipped my dry rosé, savored my pappardelle bolognese (while the Oilman ate bacon-wrapped meatloaf!), nibbled strawberry cake and thought to myself that I’d be happy to feast like that every day.

Then, it occurred to me that, in an odd and cheesy kind of way, I do: My sustenance is the very love that demands so many tiny, unseen sacrifices — and that yet allows many an undeserved overt pleasure, too.